A temporary foresta at M9 Museum of 20th century in Mestre 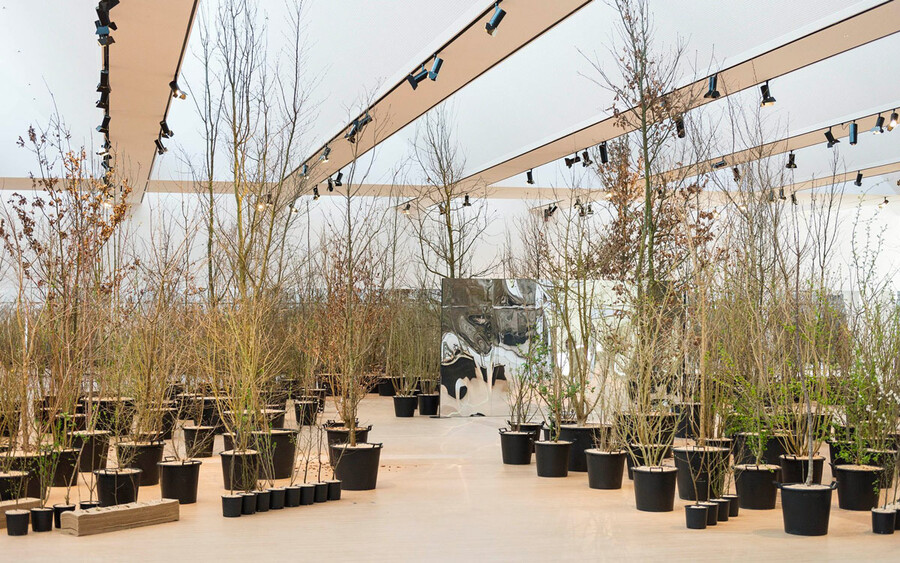 Art becomes nature. Or better, nature is art. That’s why in Mestre they decided to stage a temporary exhibition of more than 600 wood types at M9 Museum of the 20th century, starting from last Friday until April 16th.

“M9 Forest. A landscape of ideas, community and future”, this is the name of the exhibition, conceived and curated by Luca Molinari and Claudio Bertorelli – oak trees, hornbeams, maples, elders, buckthorns, elms, ash trees, cherry trees, hazelnuts, dogwoods, hawthorns, privets, dog roses, sloes and lantanas, for four weeks they create a temporary forest, with the aim of reacting against pandemic emergency but also of witnessing the great care that the Republic of Venice always bestowed on the safeguard of the environment.

180 trees, up to 4 metres high, that with their crown dominate the underlying vegetation, an undergrowth with plants of about 40 centimetres high. And the forest, thanks to a mirror film, reflects of the walls of the third floor of the museum, underlying the strict relationship between Veneto and its woodlands.

More than the beauty itself, the final destination of the plants must be considered.

At the end of the exhibition, the trees will be donated by the museum to seven municipalities of the Veneto plain. The younger plants will be given to citizens, so as to spread the art of preserving biodiversity in one’s own garden or neighbourhood.

As part of the initiative there will be the “Jean Giono Prize. The man who planted trees”, the award established by Veneto Agricoltura, the regional board that is in charge of managing Veneto woodlands. The prize will be bestowed on someone who has distinguished himself in the promotion and the creation of woody vegetation systems.

Moreover, it is worth mentioning that the Museum of 20th century in Mestre has long started the greentech project "M9 Zero Impact", with the ambition of becoming the largest Italian museum at zero energy impact, thanks to the installation on the roofs of the buildings of a new photovoltaic system that will bring an increase of power from 80 to 270 kW, with 995 square meters of solar panels without visual impact and a total production of 6.4 million kWh. The goal is to achieve energy neutrality within the next three years.