On the 29th April 2013 Itlas has obteined the System of Ambiental Managment certification conform to the UNI EN ISO 14001 :2004. The certification have been released by Icila. The intervention has been made possible thanks to the POR financing – Objective regional cometitivity and occupation FESR « European fund for regional development “ 2007/2013 of Regione Veneto.
In 2017 the company adapted to the new standard in force. 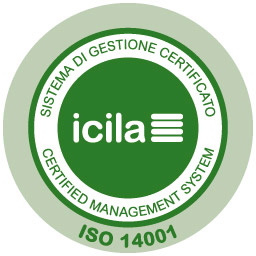