Crisanti, the professor of the “Veneto model” against Covid-19 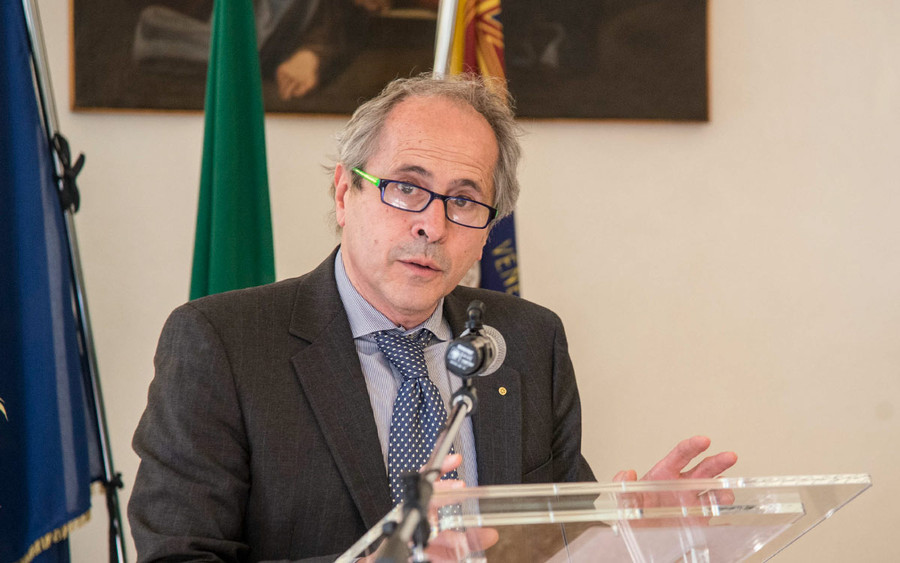 “In order to stop the virus, tests must be done to all people at risk”

He says that he will always carry in his heart the sight of his exhausted assistants. Nights and days spent processing swabs. He says this, with the same shyness and emotion that he showed when, out of his usual habitat, he received the Seal of Padua or when he became honorary citizen of Vo’. He was moved while watching the row of children of the small town on the Euganean hills, as they spontaneously showed up to have the tests done, during the third test on the people of the first Veneto cluster, aimed at analysing the whole genetic background.

For the people of Veneto Andrea Crisanti – since end October Director of Molecular Medicine Department at University of Padua as well as Head of Microbiology and Virology laboratory of the hospital agency – is the one who, by realizing the need of testing even asymptomatic subjects, limited coronavirus damages and saved thousands of lives, thus making the strategy of this Region a model for the rest of the world.

During an interview with Nicolò Rocco, president of TEDxTreviso (Itlas among its partners) Crisanti explained his strategy, which he was able to pursue even against the official lines of World Health Organization and thanks to a president of a Region, Luca Zaia, who trusted him.

“More than an intuition, mine had been a turning point dictated by the results coming out from the pilot study at Vò. Perusing the forms of all the people who had been tested - the professor says – we found out that 43% of the positive for virus showed no sign of infection and that 3% of Vò population was positive. An enormity”.

Sixty-five years old, born in Rome, he used to work at Imperial College in London and then decided to take a leave period in order to move to Padua – the first thing he did in these days of February was that of calling Zaia. “I asked him to repeat the testing in order to see what would happen with the lockdown of Vò, which was undertaken mainly out of panic. That provided us a detailed picture at the outbreak of the epidemic”.

That is - quarantine reduced by 98% the contagion. Not only. We found new cases, of people who had been infected by asymptomatic.

“In quarantine, people recovered soon, the infection was less serious and it had a lower viral rate. But epidemic – Crisanti explains – cannot be contained only by controlling people. We needed a different approach. We had to start from ill subjects and find, so to say, silent people”. The strategy of looking for asymptomatic through tests, thus stopping clusters from the very beginning. In the hospital of Padua, the largest in Italy, they moved on in this way – all hospital staff was tested. “Potentially that hospital was a bomb, but this strict policy brought its results” states the virologist.

Three months have passed, since that February 21st when everything begun. Lockdown has ended and we entered in second phase of Phase 2. “But on Covid-19 what we know is still less that what we don’t. We know that it changes far less than other viruses and that it is slightly steadier. And we know – underlines Professor Crisanti – that we are infected with a lower viral rate and fell ill less seriously because we use surgical masks and practice social distancing”.

But now, what can we expect from this no-lockdown? “We shall find out in a month”, he says, reminding us that reopening has been decided when the number of positive cases was exactly the same that had first brought to the decision of locking down the whole country, without a detailed analysis of risk. And he adds: “What worries me most, is that we do not have a clear estimate of the real number of infected people, which can sway between five to ten times the number of diagnosed cases. For this reason, we do not know which danger we are facing”. But luckily, Andrea Crisanti does not believe we shall be compelled to go back to a general lockdown. “However, in case of new outbreaks some areas will have to be closed. Now we have the recipe to block the virus, but we have to see if we have learnt the lesson”.

Then, there are the serological tests, upon which many rely in order to feel safe and resume their economic activities with more confidence. Crisanti does not agree. “They are not reliable for an active surveillance” he says. Serological test, based only on immune response, cannot tell us if we are still infectious or not. To this, it must be added that asymptomatic produce very few antibodies or even none. For this reason, according to the professor of the “Veneto model” it is necessary that we make an effort and start to think in terms of risk. “We have to test people at risk, considering their lifestyle, their connections, places, kind of jobs” he explains.

Among the thousands who fell ill during these months, the clinical outcomes have been very different.

The answer should be found in genetics, which is susceptible to a disease generated by a pathogen.

“We saw the same thing with HIV, a disease that have spared entire areas in Africa. For this reason I asked for the third mass testing at Vò, children included, in order to understand if there are genetic variants of Covid-19. Also because we have already promising therapies (like that of using plasm) which are now reserved only to seriously ill patients, but which will be, later on, used for all those who will be infected according to their genetic background”.

Since Mid January the physician had been receiving information regarding the diffusion and the contagion capacity of Covid-19 and he was telling to everybody that Italy could not avoid the risk of the outbreak of epidemic. Himself part of a scientific community that often disagrees on what should be done, today he states that since our Country is deprived of scientists and researchers, answers are left to virologists but, above all, that epidemics must be defeated on the territory. The advantage of Veneto, like that of many countries used to cope with epidemics, was that it has been facing West Nile Virus for the latest years and that, for this reason, it has already settled an integrated system of knowledge and answers. Which had not been of small consequence, in terms of human lives.